You are here: Home / My Blog - The Mechanical Pencil / A Tale of Two Mockingbirds Orville and Wilbur

A Tale of Two Mockingbirds

Editor’s Note on “A Tale of Two Mockingbirds Orville and Wilbur”:  This was my third speech for Toastmasters.  In it, I was working on some of the suggestions I had received from my second speech.  Getting comfortable in front of an audience and keeping their attention were the main suggestions were the focus.

It was a fun story that actually happened to us.  The challenge was cutting the story down to no more than 7 minutes.  There was a lot that was left out because of the time constraints.

Mr. Toastmaster, fellow Toastmasters, and welcomed guests.  Today I have for you a story of survival, perseverance and the love of a good woman.

It was June 4th, 2003.  My wife, Ranae, and I had just sat down for dinner when the phone rang.  Our neighbor was frantic.  A baby mockingbird had fallen from its nest and our neighbor was sure it would be eaten by one of the rogue cats in our neighborhood.

Now, it should be noted I was our block’s veterinarian.  If you had a problem with your car you talked to James across the street.  If your lawnmower wouldn’t start, that was Charlie at the end of the block.  A legal problem, that would be Cesar who worked at the Sheriff’s Dept.  Me, I was animals.

I had worked as a vet tech in my youth.  Bird-saving wasn’t my forte.  As a matter-of-fact, though I had tried many times, I had never been successful.  However, to calm my neighbor, I carried the tiny thing home.  Then, once my wife, saw it, she fell in love.  Now, I needed a miracle. 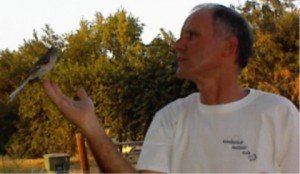 Of course, I didn’t reach for the “miracle” thing right away.  Changing expectations would be the much easier course of action.  “You know, honey,” I said,  “I don’t think there is much we can do for this little fellow.  He likely won’t make it 48 hours, but we’ll give it our best try.”

She looked at me with those loving eyes and said, “We’ve gotta save him.”

Looking for a Miracle

We didn’t know anything about mockingbirds.  But, the one thing I had now that we never had before, turned out to be the miracle I needed – the internet.  “What does Google say about how to feed mockingbirds, Babe?”  Mealworms.  Okay, mealworms. Where do we get those?  A bait store. Huh.  There’s one less than a mile away.  “What do we do, chop them up?”  Feed them whole?  Really?  Okay, I’m in.

I made the worm run and got back with a buck and a half worth of mealworms.  We held one in front of the fledgling.  Nothing.  Could they even see?  Smell?  Maybe I should cut it in half.  It looks so awfully big compared to such a small bird.

It took us awhile, but we finally learned if we bumped the box, the baby would think mom had landed on the edge of the nest with food.  Jostling the box trigger the baby bird to open its mouth.  We put one end of the worm in, the baby did the rest.

Two days later, our neighbor called to say another baby mockingbird was found.  Now, we had two beaks to feed until they learned to fly.  We named them Orville and Wilbur.

Worse Than Taking Care of a Baby

For the next four weeks, it was feeding a worm every two hours during the day.  The boys grew slowly.  We just weren’t as good as Mom and Mother Nature.  To hasten the process, I developed a “training system”.  I bought a small bell and rang it before feeding a worm.  In no time at all, they associated the ring of the bell with meal time.

Ranae and I worked together.  One of us would hold Orville and the other the bell and the worm.  We stood a few feet away and rang the bell.  Orville flew!  Landing clumsily into my hand, he gobbled the worm.  Wilbur had a little more grace and finesse and soon we were standing ten feet apart as the birds flew to the sound of the dinner bell.

A few weeks later we moved the exercise outdoors.  The boys – we had no idea of their actual sex – the boys were flying well when a light gust of wind caught Orville’s wing and bent it backward.  The poor guy was grounded.

As the days went by, Wilbur kept flying and getting stronger.  The extra time in the nest had helped him advance more quickly.  A friend stopped by on a beautiful, warm July Saturday afternoon and we brought Wilbur out for a training run.  He was feeling good and we probably overdid it.  Once he had his fill of mealworms, he took off for the tallest tree in the neighborhood.  He spent his first night outside.  The next morning I rang the bell.  Wilbur came flying in, but wouldn’t land on my hand.  I placed a worm on the sidewalk for him.  He thanked me for the meal and headed north.  We were now batting .500 in the saving-mockingbirds department.

After a few weeks of R & R, Orville got his wings back and we continued training.  Late in August, after a particularly large feast of mealworms, Orville headed for the top of our mulberry tree.

The next morning at sun up, I rang the bell with a meal worm in the palm of my hand.  I wasn’t sure which direction he came from, but I could hear him crash into the Mulberry tree above me.  I held still.  He squeaked.  I rang the bell.  Whoosh!  Orville landed on my fingertips, snagged his favorite treat, tossed me a wink and a nod, then flew off.

For the next month, I would sit in my lawn chair at sunrise and sunset, worm in one hand, a bell in the other.  (The sunset session also often included a cocktail.)  Almost without fail Orville would land and snack.  We had imaginary conversations of his adventures – he was getting along fine.  He said he ran into Wilbur once in awhile, but that Ole Wil was too proud to take handouts.  Orville claimed we had the best worms east of Union Ave.

As time went on, the days got shorter.  Our cats discovered I was chumming a feathery meal for them twice a day and surely wanted to take advantage.  Orville noticed the cats, too.

It was early October and the weather was turning cool.  I hadn’t seen Orville in a few days.  It was taking him longer and longer to fly in.   Did mockingbirds fly south for the winter, I wondered?  The light was failing, the sun was setting.  I continued to ring my bell and I had plenty of worms left.  As I gathered my worms and bell to head inside, I thought I heard a familiar rustle in the tree above me.  One quick ring.  One last visit.  Orville said he’d found a girl and needed to settle down.  I told him I understood.  He grabbed a worm one last time, took an extra lap over our house, and headed for the tallest tree.  Both Orville and Wilbur had learned to fly!